The cliffs of Yesnaby are one of the most dramatic and picturesque places in Orkney. My father, the late Keith Laird, was fond of the place and made this screen-print of it, which I have always loved for the un-natural red sky.

Yesnaby does have a dark side. It can be very bleak, is sadly popular with suicides, and is situated on a large deposit of uranium.

In the late 1970s and early 1980s efforts were made to start mining the uranium in Orkney. A local campaign group was set up to resist this, and the protestors did eventually triumph. The Orcadian landscape was saved for future generations of tourists and retirees.

Many will remember the striking sign seen upon entering Stromness, which was hand-painted by the artist Ian MacInnes and read:

Keep Orkney green and attractive, not white and radio-active.

Peter Maxwell Davies composed The Yellow Cake Revue as a protest against uranium mining, from which came one of his best loved pieces, Farewell to Stromness. The following picture was created as a tribute to him, to accompany an article on the uranium mining campaign for The Orkney News and iScot magazine, which can now be read online here (click link).

I met Peter Maxwell Davies several times as a young child, and even escaped from one of his social gatherings in Rackwick on Hoy by climbing down the cliff next to his then-home. There are many pictures of him online, but seemingly few from the period I recall, so I worked on this primarily from memory (excuses, excuses). 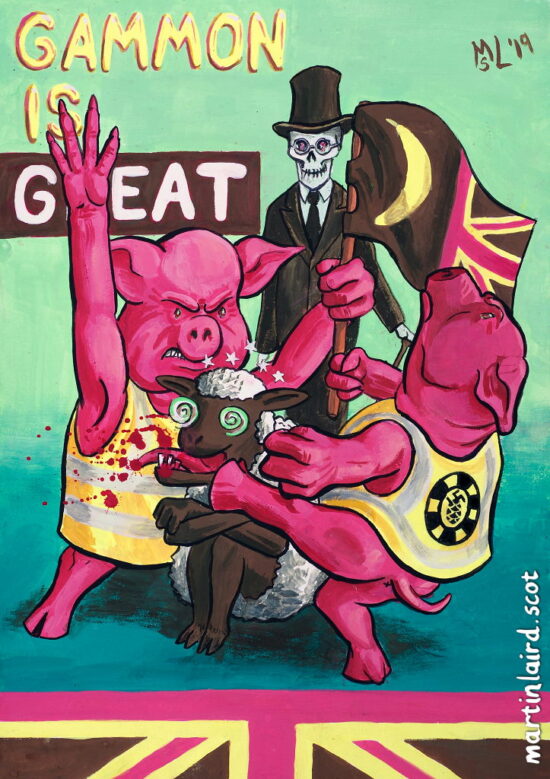