The New Adventures of Saint Magnus in the 22nd Century

Magnus Erlendsson was beatified as a Saint due to his pacifism in life, and death by martyrdom. During the Battle of Menai Straits, which was a Viking raid on Wales, Magnus had refused to fight, staying aboard ship to pray instead. He was eventually murdered by his cousin Haakon , who was also his rival for the Earldom of Orkney. They had ruled jointly for 7 years prior, but Haakon was jealous and betrayed Magnus after luring him to the island of Egilsay.

“I now appear in these degenerate days, when virtue’s fled and vice triumphant sways.”

A vision of the Saint by an anonymous poet, Elegy in St Magnus Cathedral in 1773. First published in The Weekly Magazine or Edinburgh Amusement, 1778.

In 1919 the bones of Magnus Erlendsson were discovered hidden in a pillar within the Cathedral built in his honour in Kirkwall. The cleft in the skull was consistent with the story that he was killed by an axe-blow to the head (Haakon’s cook Lilolf had grudgingly struck the blow.)

In the painting above, Saint Magnus is imagined as an undead, immortal caped crusader. By the time of the 22nd Century the planetary ecosystem has collapsed. Orkney is a wasteland inhabited by cannibals and 1980s children’s cartoon rejects. Our hero must reconcile his pacifism and tolerance with the fact that he is surrounded by utter selfishness, evil and barbarism.

This picture was first produced to accompany a column by The Orkney News in iScot magazine. 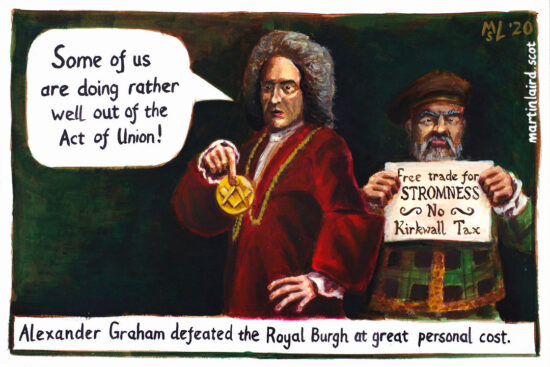